April 22, Earth Day 2017, saw a march for science around the world. In a way, it is strange to think that people have to march in support of one of humanities highest achievements. But, sadly, that is the case. Science has become politicized.

On the one hand, that is natural because, as scientific research becomes more complex, science needs funding to realize its full potential.

It is hard to understand why science has enemies. Science, which has eradicated diseases, created technology, helped bring the Renaissance out of the dark ages, and that gave us levels of communication and helped build civilization, is under attack.

There are two major human inventions that drive the highest in the human spirit. One is science, the other is the arts.

A few years ago, I wrote this blog entitled “Oil Vs Science.” I republish it here because it is still relevant. Here is a fact: within the next 30 years, renewable energy can totally replace energy from fossil fuels. Think of what that means to the planet. Think of what that may mean politically in the world. It is science, and only science, that can lead to that positive development.

I support science as one of the most remarkable human achievements the world has ever seen.
RF 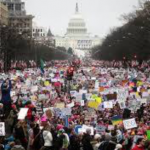 Over 60 years ago, my father had one of his lungs removed by the leading pioneer in that type of operation. This was the 1950s, and everyone smoked. My father’s doctor insisted that my father quit smoking, which he did. Many of the other patients didn’t, and therefore, many of them didn’t last long. Only the ones that quit smoking lived much longer. My father went on for decades after his surgery. He did not have lung cancer or emphysema as did most of the other patients. He had scar tissue on one of his lungs caused by a childhood disease that was destroying the lung and his ability to breath.

In the early 50s, this doctor and his colleagues knew that there was a direct relationship between smoking and lung disease. No question about it for them. But they were up against an industry that sold cigarettes. There were “tobacco states” in which the politicians from those areas were dependent on the big tobacco companies. As far as they were concerned, there was no connection between smoking and illness. It was just a theory a few doctors and scientists had. What do they know? Let’s find some doctors who disagree. Let’s fund some research that proves how healthy smoking is.

It is amazing how little things change. The overwhelming scientific evidence is that global warming is real and there are human causes. That understanding goes against the interests of big oil. So, many politicians, who happen to create laws, regulations and fund agencies, are happy to deny the obvious.

I suppose there are those who still argue against the germ theory. Louis Pasteur had to suffer from the medical establishment when he asked them to wash their hands. How could something so small cause so much trouble? It didn’t make and sense, at least to them.

Any politician from right to left who wants to argue that there is still some disagreement about global warming and its human contribution to it is either an idiot or an opportunist. Given the vested interests of the oil companies and how they contribute to political campaigns, I would guess its opportunism. That means they have to be smart enough to know the truth that they are so ready to argue against. There is something more honorable in being an idiot given that comparison.

Science is an intellectual discipline. It is not a belief system the same way math and music are not belief systems. And when people say things like, “They have their own vested interests because they get funding to do their work,” they miss what science is. Imagine you could buy off science. Who has more money, the funding agencies for scientific research or oil companies? If it were just a matter of money, the oil companies could buy off science, and there would be a lot of research showing how there is no human hand in global warming.

But I don’t need to ask a scientist. My wife, as an avid gardener, knows what’s going on. She can tell from the calendar when various plants are supposed to bloom. And, over the years, they have bloomed sooner and sooner in the season.

I suppose the politicians can say something like, “Yes, the planet is warming, but we don’t really know if it has anything to do with CO2.” Yes, we do know. The fact is, they could know. They don’t want to know, because if they admitted the truth, they would need to vote in favor of human beings and against the interests of the bosses at the oil companies.

I suppose I sound cynical. Notwithstanding, to myself, I sound realistic because how can people argue against 90% of the science. I suggest everyone read my friend and colleague Peter Senge’s book about this called The Necessary Revolution: How Individuals and Organizations Are Working Together to Create a Sustainable World. This is a book that verifies science, and goes further to discuss how to address it.

I can understand the oil companies. They are amoral (not immoral) and have little value driven objectives. This is a question of leadership. Given every corporation is amoral because they are not people but institutions, those who lead the companies must insist that higher values drive decisions rather than simple opportunism from a short-term perspective. I can’t understand the obvious lack of intellectual honesty of the politicians and ideologues that claim science has not proven its case. You can look this up. It is not one or two data points that show the patterns. There are hundreds of data points, all confirming each other, all aligned and consistent.

My advice is this: do not support or vote for any politician, no matter where they stand politically, who denies scientific fact and points to the most obscure fringe scientist who question the data. Also don’t vote for politicians who think Elvis is still alive or who think the moon landing was a fake.