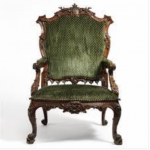 The chair was getting on in years, and it thought that perhaps it was because of its age that those who sat in the chair were getting more silly and far more stupid that ever. It remembered all the brilliant minds and brilliant bottoms that sat in that chair, and then it dawned on the chair. “It must not be me if I can tell the difference between the smart and important words and the silly and stupid words. It must be the actual people who sat in the chair.”

“That means,” the chair thought, “that I have had nothing to do with how smart or stupid the people who sit in me are.” This was quite a revelation for the proud chair to have. After all, the chair couldn’t argue against the thought that it was the people and not the chair that caused the quality of thinking and saying. “That means,” it thought, “that I never had any influence of those who sat in me.” The chair felt both sad and a relief all at once.

And so the chair came to understand its role in life, to support people whether or not they were smart or stupid. Gone was the pride. In its place was the comfort of doing the job it was meant to do, which was to happily bear the burden that came its way.