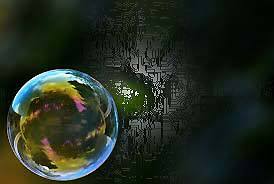 Example: keyboards. Most computer keyboards are set up like the earliest mechanical typewriters. When typewriters were first introduced, typists typed too fast and the machines keys would get stuck. In order to show the typists down, the keyboard was laid out to be less intuitive, and more difficult.

In some ways, this principle is pretty obvious. Think about the success and spread of Facebook, Twitter, YouTube, and other popular tech offerings. The more you have the more you have. The growth can be exponential.

But there is a dark side of the principle of increasing returns. It is how groups of people get their information. The popular term is the “bubble.” Many people live in a bubble in which the only data they have access to conforms to their own concepts and belief systems.

This is why conspiracy theories are so popular. The more people agree with the theory, the less objective facts can penetrate the bubble. The more the case is made that Martians are to blame for all of the ills of the world, the more people, with their torches, are out looking for Martians.

Even otherwise sane people, who should know better, can fall into crazy conspiracy theories. Evidence and reality, as it is in cults, lose their credibility. As in the old saying, no amount of facts will get in the way of a good story.

It is easy to see the bubble in the extreme. It takes a truly strange person to believe that Martians have taken over, or that Muzak is a plot to dull the minds of the masses by forcing them to listen to inane music. (This last one makes actually makes sense to me… JUST KIDDING!!)

And, now, in political life, the fringe conspiracy theories have made it to mainstream. I suppose it begins with doubting science as a credible source. If you are to be against understanding global warming is real and is caused by human beings polluting the planet, you have to discredit science.

Not that science has all the answers. But it does have something better than all the answers, which is a way of seeking reality. First we have to contrast real science with what we all learned in high school. We learned that the so-called scientific method was to begin with a hypothesis, then look for evidence, and then confirm or deny the theory. This is not how the true pioneers of science actually think.

Professor Stuart Firestein, a neuroscientist and Chairman of the Department of Biology at Columbia University in his book Ignorance – how it drives science, writes that most people have a false impression of science. Rather than what most of us learned in school as the “scientific method,” Firestein says, “…it’s mostly a tale woven by newspaper reports, television documentaries, and high school lesson plans.” He goes on to describe the true scientific process as pursuing understanding of the unknown. In fact, he created a course entitled Ignorance in which guest scientists speak for a few hours about what they don’t know.

Rather than rely on categorizing, the students learn how to better observe and reason. In fact, Sir Isaac Newton said, “Hypotheses has no place in science.” Rene Descartes said, “To understand any set of phenomena, first rid yourself of preconceptions.”

Here are two pictures: You live in a bubble of your own concepts, and accept or reject information based on how it conforms to your preconceived beliefs; or you live in a world in which everything can be re-considered and rethought, and observation and evidence is critical, independent of belief.

Of course, I am making the difference seem like black and white. Usually it is not. Usually there is a mixture of the two pictures. But these approaches are not equal, especially if you are to create more of the life you want to create. Over the years, our research and experience in structural dynamics have shown how the concepts people have, when built into their structures, lead to an oscillating pattern in which success is finally reversed and, like a rocking chair, movement forward leads to movement backwards. When concepts are not part of the structure, then the two critical factors are the outcomes you want to create, and a clear and accurate understanding of reality as it truly is in relationship to this outcome. From that, structural tension is formed, and the tendency is for the structure to resolve in favor of the desired outcome, especially because you are working towards that end.

People often talk about “limiting beliefs.” They think that some beliefs are limiting and some are not. ALL beliefs are limiting. What is revolutionary in our work is this simple principle: it doesn’t matter what you believe to be an effective creator.

People in the belief business hate this idea, because what they have to sell is their belief systems. But successful creators have believed all types of things, and it didn’t matter. In our new book IDENTITY, Dr. Wayne Andersen and I write that what you think about yourself doesn’t matter at all. Of course, to those in the belief business, that idea is pure blasphemy. As we have said, have they never read a biography of successful people? If they had, they would have found out that hardly any of these successful people had high self-esteem. What they thought about themselves was irrelevant in their creative process.

You can live in a bubble of your own making. Or you can break out of it by learning the disciplines of observation and reason. You may change your mind from time to time. Life will become vastly more interesting and involving.

In our flagship course Fundamentals of Structural Thinking, step one is to begin with nothing, that means without a concept, belief, past experience, model, or theory. As Rene Descartes said, “..rid yourself of preconceptions.”

This is a true discipline that takes learning and practice. But it pays off in discernment and understanding. The world opens, and sometimes, new and original insights unlock the beauty of reality.