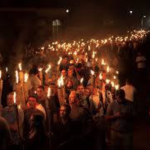 It is the essence of irony that white supremacists are not the most gifted among us. I suppose that is why they hang onto identity to make up for their actual inadequacies. For them, there is great synthetic comfort in holding on to a straw of false pride, and, hating other groups they see as less than them. That’s all their lives have become. And, when hate migrates into terrorism, as it did in Charlottesville, the pretense of anything good or noble that they would like to claim dissolves into the reality it is: a cult of evil.

What happened yesterday was just one event that dramatized a sickness in America. Actually it is a sickness that is finding pockets of malignant cells throughout the West these days. It is easier to seethe with hate than develop, work hard, build, create, and join together with others to build a better world.

To think that in 2017, after the history of the Twentieth Century, with millions upon millions dying because of National Socialism, that Nazi flags could fly in America is surreal. But there it is. History can seem lost to a world that, in its past, had sacrificed so much to overcome evil, only to see it reappear.

What can we learn? That nothing is ever fixed. That social order to guarantee such values as freedom and justice can be so easily undermined, and that progress is not assured in a steady state simply because at one point it had its victories. The human condition is the same as it was over 2000 years ago, and while there has been dramatic progress in technology and science, the structural makeup of humanity remains unchanged. That means that society has a choice it may not know it has. For it to make that choice, it has to always move ahead in the direction of freedom and justice for all. If it becomes complacent, it will lose ground, and the cancer of that which is lowest and most base in the human condition will have its day.
RF