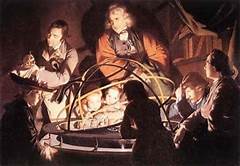 The Age of Enlightenment brought a new idea to world civilization: a sense of seeking reality as it truly is. This was nothing short of a revolution in thinking. It was not a political revolution in which, as Robert Frost observed “the same people end up on top,” but one of science and the arts.

Good old Wikipedia says this about it: The Age of Enlightenment included a range of ideas centered on reason as the primary source of authority and legitimacy and came to advance ideals like liberty, progress, tolerance, fraternity, constitutional government and separation of church and state.

From this period in history, the world saw amazing advancement, one of the most important, the development of democracy. The founders of the United States were children of the Age of Enlightenment, steeped in the notion that reason would be the driving force to build a better and fairer social order.

In the arts and science, the Age of Enlightenment has never stopped. This is because to make art or science, one needs a competent fix on reality as it is. This is how a violinist plays in tune and a doctor measures a patient’s temperature.

In the creative process, reality is a critical factor. Where are we now in relationship to our vision of where we want to be? Artists and scientists are trained to describe reality as it is, independent of how they might like it to be. You can’t make art or science based on a lie.

Contrast that with what’s going on in politics these days. There’s always been “spin” where politicians try to describe things to their advantage. But there has never been such an excess in blatant lies before now. Have we entered an Age of Unenlightenment?

What is especially harmful to society is the acceptance of some of the most obvious lies by politicians simply to support their positions of power. They have taken lying to a new low. Have they no shame?