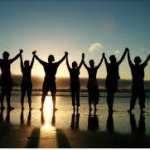 Rejuvenation is the reversal of aging and thus requires a different strategy, namely repair of the damage that is associated with aging or replacement of damaged tissue with new tissue. Rejuvenation can be a means of life extension, but most life extension strategies do not involve rejuvenation.

Now the traditional meaning of the word is the reversal of aging.
As far as it goes, I have experienced a series of, what could be called, rejuvenating cycles. They have to do directly with the creative process. And, they have to do with learning new things. Creating and learning are inextricably tied. If you are creating you must learn. It comes with the territory. I know young people who, to me, seem like old fogies. They are already, even in their 20s, set in their ways. They are bored out of their minds. And the reason is, they are boring. What I mean by that is they have ground down to an attitude in which they know it all, have nothing to learn, are not interested in opening new possibilities, and are not in the business of creating anything, especially their own lives. I feel sorry for these kids.

Maybe later in life they will become young again. And that is the principle of rejuvenation, becoming young in spirit. What does that mean, young in spirit? First let’s say what it is NOT. It is not having a mid-life crisis, buying a sports car, and trying to act like a teenager. It is not entering a childlike dotage, either. Rather it is rediscovering that youthful spark you had in the best parts of your life.

It is opening a level of involvement with life that is fresh, new, interesting, dynamic, where something new can be born, something so new, that, maybe you’ve never thought about before.

It is overcoming the predictable, routine, day-in, day-out grind. But how is that actually done? That is the central question.

Let’s focus on cause rather than effect. The effect is rejuvenation, but the cause, what you can do to create that effect, is by delving deeply into your own creative process. This is about orientation and activity. Creating is generative. The more you create, the more energy you have to create.

And there are a few more things that those who know my work will find familiar. One is to eliminate concepts from your life-building process. Exactly what I mean by that are the various worldviews, personal ideals, social ideals, notions about how the world works. As I have said many times, get out of the belief business and into the creating business.

What is the opposite of rejuvenation? I suppose degeneration, or maybe decline. It certainly is going in the wrong direction. Well, your concepts are the ticket to that destination. The more you fill your life with your beliefs, worldviews, philosophic constructs, theories, speculations, and dogma, the less you will be able to engage with life. Here’s why…

If you think you have the answers, you don’t look at reality to see what’s there. Your concepts hypnotize you. This is what every art student has to learn: how to see reality without the filter of their concepts. Don’t look for answer’s to life, instead, look at life itself. Observe, look, without assuming you will know what you will find. If you do this, suddenly you begin to see some things that you had never seen before. Suddenly, life because more interesting. Suddenly you have new ideas, new interests, new aspirations.

And this is the key to rejuvenation. Originality. This doesn’t mean simply coming up with crazy ideas no one has ever thought of before. In this sense, originality means you are in touch with the origins of a new idea, the source of it. And that source is your own imagination, your own observations, and your dynamic urge to create something new.

Don’t use the creative process as yet another process to react or respond to circumstances. Use it to create. And when you do, and when it becomes your orientation, your way of life, that youthful spirit will emerge as a by-product.

The creative process is no such a thing. It is not something that happens to you, it is something in which you engage. It is not what it does for you, it is what you are doing to bring into existence those things that matter to you.