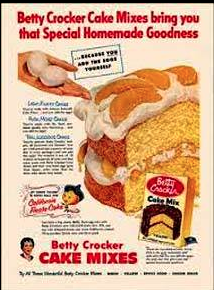 In the 1952, Betty Crocker introduced a new easy to make cake mix. All you needed to do was add water, stir, and bake. The strategic product direction for the company was to create goods that were almost effortless to make, for example, Bisquick, whose slogan was, “90 seconds from package to oven.” Bisquick was “invented” in 1930 after one of their sales executives traveling in a train dining car complimented the railroad chef on his outstanding fresh biscuits. The chef told him his secret, that he had made a pre-mixed batter consisting of lard, flour, baking powder, and salt. All he had to do was put it in a baking pan and heat. Back home at the corporation, the executive replicated the chef’s idea of a mixture that was ready to go right into the oven, and created Bisquick. The product hit the shelves in 1931 and was an instant sensation.

General Mills thought that the instant cake mix would also be an instant hit, but to their surprise, sales were low and not moving. The company engaged two business psychologists Dr. Burleigh Gardner and Dr. Ernet Dichter. Their studies found that housewives felt guilty about making a cake so easily. Somehow, it went against their notion of what it is to be a good 1950’s housewife. So the psychologists suggested one additional step in the process, which was for the housewife to add one egg to the mixture. The mixture didn’t need them to add an egg for it to work. But by putting in that direction, women felt like they were doing their job. Of course, the egg was really symbolic of their identity as good wives and mothers. Ease and convenience were important, but not if it got in the way of their image of themselves.

This little story has a world of insight in it. If the 1950’s housewife were focused on creating a satisfactory outcome in the most convenient way, adding water to the mix would be fine. How many other extra steps, or symbolic gestures do we add, just to bolster our identity? Often, the symptoms of identity issues are found in small, almost invisible acts.

For many people, if success comes too easily, they can’t handle it. They think that they didn’t earn it. When that dynamic is in place, the pattern is for the person to manage to screw up his or her success over time. Often, people feel better about themselves having failed than succeeded if the success came too easily. They are equating success or failure with how much they thought they did or didn’t earn the success.

You want something. That is the outcome. If it came to you in some miraculous way or if you had to work your fingers to the bone, what difference does it make? Some people have more talent than others. Talent only means that some skill or mentality comes easily. Others with less talent who have the same goals must work much harder to accomplish similar results. It would be nice if we could just snap our fingers and have more talent and natural ability. But the fact is, we have as much as we have. That is the starting point, but not the ending point.

Many people who ended up accomplishing astonishing results did so because of their lack of natural ability, so they had to work a bit harder than more talented people. It says nothing about the person him or herself. The dedication to creating the result matters. The process will be as easy or hard as it has to be. While people love to glorify process, it matters little. To Mozart, music came easily. It seemed to pour out of his imaginative mind. For Beethoven, music didn’t pour freely from his mind. He worked it over and over, testing, experimenting, developing, growing, and deepening his artistic abilities. Both men produced some of the greatest music that has ever been written. But what if Mozart had an identity issue in which he thought that his music came to him too easily, so, therefore, it couldn’t be very good? Or what if Beethoven thought that if he didn’t have the talent of a Mozart he should give up trying to compose? Of course, it is easy to see the absurdity of the concept when it comes to Mozart or Beethoven. But when this concept strikes closer to home, it is taken more seriously.

Here is a theme to understand throughout your own life: what you think about yourself doesn’t matter a bit in the creative process. You don’t need to add an egg when it is not needed just to pander to your identity issues if you happen to have any. Use the egg example to see if there are other ways you are creating false symbols to prove to yourself that you have earned your success. If you have talent, nice. If you don’t have talent for those things you want to do, also nice. Just a different menu. Remember the Mozart/Beethoven lesson, and carry on.