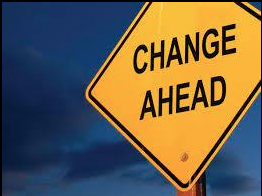 There are many changes we go through in life. These major changes can seem a little scary if you don’t know where you are going. They can seem a bit disorienting if you do know where you want to go, but don’t have a clue as to how to get there. They can seem driven by conflict if the change was not of your own choosing, such as losing a job or a relationship in which you were left. In those cases, you thought you were fine, but then, you had to rethink your entire life.

These periods, while sometimes hard, are often some of the best things that can happen to you. While you are going through that, you won’t be able to appreciate the change. But later, once you have landed in your new life, once you have landed on your feet with an even better life than the one you have left, you will look back in retrospect and see the transition for what it was, a period of growth, soul searching, rediscovery, and renewal.

Our friend, Candice Carpaenter ran emerging businesses at American Express, won an Emmy for a documentary series when she was a senior executive of Time Warner, and she is the founder of iVillage. And after she left iVillage, she wrote a wonderful book about a life in transition called Chapters.
In Chapters, she talks about the profound cycles of change a life can take.
The first stage she calls The Gig Is Up.

When you try to hold on to a job, career, relationship, living situation, or the direction your life has taken, and, to use Candice’s phrase, the gig is up, change will be thrust upon you with greater and greater force until you let go. The more you try to hold on, the more the intensity of the tornado that is pulling you out of the present unworkable situation.

The next stage in the pattern is Falling.
Candice describes Falling this way: “disengaged, disidentified, and disenchanted, we fall into disorientation.” This is the most frightening experience we feel in the cycle.
Then comes A Walk In The Desert in which you are able to reflect about the most existential issues of your life.

Candice describes still more stages in the cycle that enable you to build your new life. There is much wisdom and truth in her observations about the nature of change. Change often is a kind of death followed by a resurrection.

One thing that will be helpful, if you are going through this type of transition, is to not spend time resenting that the past is over. The faster you can come to terms with reality, the better you will be able to move to your next stage of creating your life. And remember that creating is not problem solving. If you attempt to make a transition by reacting to the conflict you feel, you will only fall into an oscillating pattern in which any success you create will not last, and you will revert back into something that is not sustainable.

If you are in transition, and you don’t know what you want, get into motion. Do things, little things. Create little projects. Built your creative muscles. Volunteer for local charities, get involved with the good works your community is doing. Do not spend a lot of time sitting around feeling sorry for yourself.

In your period of transition, if that is where you are right now in your life, you don’t need to know where it is going to finally land. And, this is key, if you start to move in any direction, you will have the momentum you need to create your future more easily than if you were not moving at all.

Don’t see the period of transition as something bad. See it as something real, and you are closer to the nature of such periods in our lives. A time to rethink, reflect, reevaluate, and then set the direction for the next major period you want in your life.