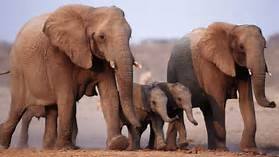 In the last 10 years, over one million elephants are gone, leaving only a little over 300,000 left in Africa. They are, indeed, an endangered species. That’s why it was particular appalling to hear that Interior Secretary Ryan Zinke had lifted the ban on the import of elephant tusks from Zambia and Zimbabwe that has been in place since 2014. Under pressure from conservation groups, Trump has put the change of policy on hold.

There are so many issues here that it is hard to know where to begin. Perhaps, the sheer stupidity, ignorance, and arrogance of the move. It is obvious that anything that President Obama put in place the new administration is trying to reverse as fast as they can, no matter how sensible the regulations are. But what is hard to take is the image of some rich white guys in Africa killing elephants to bring home something to hang on their walls and a picture to post on their Facebook page while doing such damage to an endangered species.

This is not hunting for survival or even sport. How much sport is there in killing the largest land animal on Earth anyway? It is ego exploitation, maybe to feel more like a “man”.

What is Zinke thinking? The claim was made that this will help finance the cost of maintaining the elephant herds. But, the majority of tourists who travel to view elephants are photographers, not pseudo-big game hunters. The claim is just an excuse to prove the point that anything noble will now be trampled on.

There is the direct impact of an individual elephant killed. But, not commonly known, the elephant’s family members go into grief about the lost of their loved one. Elephants are among the smartest animals in the world. They feel lost, grief, and trauma.

Sometimes it feels that any well-intentioned, humanistic, altruistic gesture is, by its nature of trying to do good in the world, needs to be shot down by a mentality that says, “how dare you try to be caring, sensitive, and of good will?” The flimsy image of hanging tough is as superficial as a tobacco company trying to claim the health benefits of smoking cigarettes.

Another example of this is what Zinke did on his very first day in office. He lifted the Obama administration’s ban on the use of lead ammunition and fishing tackle used on federal lands and waters. The ban was put in place to protect birds and fish from lead poisoning. Birds such as the bald eagle, the American national bird. Does ammunition that contains lead kill animals any better than ammunition that doesn’t contain lead? The lead gets into the ecosystem of the forest and harms other animals. What is the point of using lead bullets when non-lead bullets are just as effective?

Frankly, I just don’t get the thinking of such people as Zinke. Was there something in his childhood? Does he have an identity problem? Is he insecure as a man? Or is he just dedicated to being a jerk?