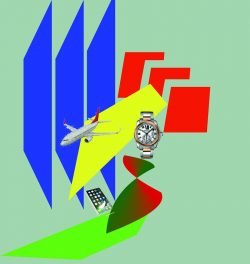 Watching the news every morning, as many of us do, can be depressing. So many sad stories, so many disasters, so many heartbreaking pieces. Every day, more and more of the same.

We can become overwhelmed with it all. And yet, most of us have a survival instinct that enables us to go on with our lives. It is the ability to compartmentalize –– that is to say, to put the news in one mental compartment, and then, to be able to change the mental channel. If we didn’t do this, many of us would spend our entire lives living vicariously in the pain and suffering of humanity, unable to act, paralyzed, confused, and defeated.

There are those who want us to be “reminded” of “what is happening in the world.” What they mean is they want us to react to injustice, grief, suffering, pain, danger, disaster. How can we stand by and witness the AIDS crisis, terrorism, famine, weather-related and environmental disasters, without the instinct to take action? Yet, if we did react and react and react, we would get sucked into an abyss.

Now, this article is not taking the position that we should ignore the world situation. Rather it is about how we can understand the situation, but still have room for leading our lives as best we can. If we aren’t able to make a place for both the news and our lives, we become lost, unable to function, even on behalf of important causes.

One of the oldest motivations in history is trying to get people to change their ways by conflict manipulation. The first step in the pattern is to create a high sense of conflict. The second step is taking corrective action evoked by the conflict. We feel pressure to get our car inspected on time, or fill out our tax form before April 15th, and we manipulate ourselves into action by thinking about the bad things that will happen to us if we don’t get them done. When the situation is short-term, it can seem to work.

But if we are talking about long-term change, this structure leads to an oscillating pattern. Here’s what happens over a more extended time:

Once the action is taken, the conflict is reduced, even if the situation hasn’t changed.
You see a news item on CNN about the diabetes epidemic, and you decide to reduce your intake of carbs. After about a week, you feel better about it all. You are no longer experiencing the conflict you had. The next thing you know, you are eating exactly the same diet you had before you saw the program on diabetes. This pattern always leads you back to the situation you were trying to change.

Here’s another description of the pattern:

Many important causes are burdened by attempting to foster productive action through conflict manipulation. The founders of these causes don’t realize that they are up against a structure that will first lead to support, but then lead to indifference. Conflict cannot be the driver for long-term change. If you are in an oscillating structure, once movement in one direction is achieved, the structural tendency for behavior is to move in the opposite direction.

So, even if you spent your life in a constant state of reaction to world events, whatever productive action you took on behalf of a better world would eventually be neutralized. This structure is self-defeating. That’s the physics of it.

But, we are not left with two untenable choices: to react or to ignore. We can understand what’s going on as reported by the news, and we can get on with our lives. Our awareness of some of the world’s problems does not call for reaction, even though we do authentically feel compassion.

Some people dedicate their lives to making a better world. I applaud those people. Some think that everyone has the responsibility to be one of those people. This notion discounts freedom of the individual, and paints everyone with the same brush. Why can’t those who choose to act on behalf of world causes take that role, and those who choose to pursue other aspirations live their lives accordingly? This is not a trivial question, because it gets at freedom of choice. Who among us has the authority to tell us how we should live our lives?
Conflict manipulation may enroll many to various causes through visions of threat, guilt, pressure, and fear, but these people will disenroll within a short period of time. So, even in a good and worthy cause, motivation is everything. If we do what we do out of reaction, not much can change. Support is fleeting, and organizers claim that the public has the attention span of a gnat. It is hard to hold the public’s attention when the underlying structure is based on conflict. This is not about attention span, but about human motivation.

Many people join the great causes, not out of reaction, but out of aspiration for a better world and a better chance for others. These people have a vastly different motivation than simply reaction to conflict. They are for the outcomes they envision rather than against the dangers they fear.

For these people to be effective, they must compartmentalize. They must not let the sadness of the world’s condition overwhelm them, for if that happened, they would not be able to act effectively. There are many cases of well-meaning people who have failed to understand the wisdom of compartmentalizing their interests, only to burn out after a few years. Intent, even good intent, never can survive a faulty structure.

It is a big world, bigger than mostly we consider. The world is larger than the news of the day, which focuses mostly on the worst events. Every day, even as the saddest news pours out of networks around the globe, unreported and unknown stories of people building their lives, building their communities, building their families, supporting the heath and well-being of their neighbors, going to work for organizations that invent new technologies or provide vital services, invent new cures for diseases, save people’s lives, enrich civilization by creating art, music, literature, and poetry, take place billions of times. The vast majority of the world’s endeavors go unnoticed by the news departments, as well they should. They are not unusual. They are an example of a world getting on with the business of living. Nothing dramatic here.
Life is big, vast, and varied. None of us live in one simple universe. Instead we live in many universes.

For those who look for unified field theories that tie everything into a homogenized whole, they cannot compartmentalize the many universes in which they live. Eventually, these people will experience overwhelm, burn out, and a general lack of appreciation of the many faceted world in which they live. They will try to make everything fit together, rather than see how unique and varied life is as it manifests itself in its tapestry of experiences.

We don’t need to pretend all music is the same. Rock is not classical. Folk music from Asia is not the same as folk music from Africa. And yet, we live in a world in which many types of music can exist. We don’t feel the need to play them all at once. In fact, to be able to truly appreciate each piece of music, we need to hear it separately from the others. It is only from this act of compartmentalizing our experience that we can make sense of the music. The very same principle is true in our lives. If everything is taken as a whole, all at once, without the ability to make distinction, we would not be able to cope with the cacophony of input. We could not understand relationship, difference, uniqueness, or range. We could not appreciate the smallest moments of quiet joys, or the largest moments of ringing triumphs.

We can empathize with suffering without losing ourselves. We can watch the news, feel deeply about the stories that are reported, and yet get on with our lives. I see, in this, a profound act of affirming life. Robert Frost expressed this instinct as an almost human defiance in a poem called “Leaf Treader.” In the poem, a man is stepping on autumn leaves now that they have fallen to the ground. He says, “I see no reason why I have to go just because they have to go.” How deep is the instinct toward life, even when to go on we must put parts of our lives in compartments. Yes, everything has its place, but we must not let anything dominate to the point of distraction. Because we are aware, sensitive and caring, we must learn to compartmentalize so we can live in the best of all of our worlds.