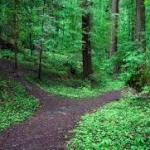 By now, everyone knows the famous line from Robert Frost’s poem “The Road Not Taken,” which is: “The road less traveled.” This line has come to mean doing something different from everyone else, going your own way, finding and exploring paths that others haven’t discovered. Yet that is not at all what Frost was getting at.

Like another one of his lines – “good fences make good neighbors” – people’s interpretation is opposite to what he meant. In “Mending Wall,” the good fences line is said by a rather dull neighboring farmer. He says it out of ignorance and an inability to understand that the character on the other side of the fence is mocking the need for a fence. “My apple trees will never get across/And eat the cones under his pines, I tell him.” That’s when he says the good neighbor line. Frost doesn’t leave it there. Frost writes:

“Spring is the mischief in me, and I wonder
If I could put a notion in his head:
‘Why do they make good neighbors? Isn’t it
Where there are cows?’ But here there are not cows.
Before I built a wall I’d ask to know
What I was walling in or walling out,
And to whom I was like to give offense.
Something there is that doesn’t love a wall.”

Now, when you read the actual poem, you can’t miss the meaning. Anyone who understood the poem would never cast themselves as the dull farmer repeating an old cliché. Yet, people have come to think that there is wisdom in the good fences line. As I said, quite the opposite of what Frost was saying in the poem.

And the Two Roads thing, again something twisted from its original meaning. The situation in the poem is that the character is describing walking through the wood, when he comes across a fork in the road. He looks down one as far as he can, and then takes the other one, the so-called road less traveled. BUT, according to the poem, there isn’t a lot of difference between the two roads:

“Though as for that the passing there
Had worn them really about the same
And both that morning equally lay
In leaves no step had trodden black.”

As Yogi Berra said, “When you come to a fork in the road, take it.”