Not too many billion-dollar companies have a moral compass. The usual corporate rule of thumb is to avoid controversy at all costs. But Nike is a company that stands for something. First and foremost, it stands for sports. I’ve worked with Nike, and, from an inside vantage point, they see sports as a civilizing force. Now they have created a new campaign that celebrates Colin Kaepernick’s stand against police violence on unarmed innocent young black men.

About Colin Kaepernick, his protest has been unfairly redefined as a protest against the flag, against the military, against mom and apple pie. It is easy to redefine something. You just lie about what someone says and what that person means. In fact, the real corruption of politics today is that lying has become standard operating practice. Objective reality is under attack. That means the decisions that many people make are not based on facts but impressions, mostly impressions designed to manipulate issues of identity. You can fool some of the people all of the time.

Of course, the big lie is nothing new. It takes a big lie to wipe out truth. Little lies don’t do the job. It has to be so outrageous and bizarre that the subconscious mind says, “It must be true. No one would believe this crazy thing that is so easily checked and disproved. So there’s got to be something too it.”

What is THE truth about Colin Kaepernick? First he sat on the bench while the national anthem was played. He did this for one reason, and one reason only. As has been said over and over, to call attention to the violent pattern of unarmed young black men being shot to death by police. He is using his public position to highlight this particular type of injustice. He found out that the act of sitting on the bench did have an implied subtext of disrespect for the flag. Once he found that out, he sought out Army Special Forces veteran Nate Boyer, who told him that kneeling on one knee, within the military, is seen as a sign of respect for a fallen comrade.

That’s it, no matter how the President tries to redefine it. Why would anyone try to redefine this very clear symbol of protest against injustice? To polarize people. To try to create a false controversy. To try to create an “us against them” mentality. Who is “us” and who is “them?” Comes down to race. Period.
Kaepernick is against the pattern of innocent black kids being killed by police, who then seem to get away with it. Who is in favor of innocent kids being killed? Doesn’t Kaepernick have the authority to say why he is doing what he is doing? Who gets to say that he doesn’t? Who gets to say that YOU are not the total and final authority of what you say and do and why you are saying and doing it? NO ONE but you has that authority. This principle holds true in this case as well.

Of course, Kaepernick has paid a price for his kneel. He could have shut up and made a fortune. But, that would be a Faustian bargain, something some of our current politicians are happy to make.

Here is how Encyclopedia Britannica defines the term:

“Faustian bargain, a pact whereby a person trades something of supreme moral or spiritual importance, such as personal values or the soul, for some worldly or material benefit, such as knowledge, power, or riches. The term refers to the legend of Faust (or Faustus, or Doctor Faustus), a character in German folklore and literature, who agrees to surrender his soul to an evil spirit (in some treatments, Mephistopheles, or Mephisto, a representative of Satan) after a certain period of time in exchange for otherwise unattainable knowledge and magical powers that give him access to all the world’s pleasures. A Faustian bargain is made with a power that the bargainer recognizes as evil or amoral. Faustian bargains are by their nature tragic or self-defeating for the person who makes them, because what is surrendered is ultimately far more valuable than what is obtained, whether or not the bargainer appreciates that fact.”

I applaud Colin Kaepernick. To me, he shows strength of character for a noble cause. His actions are a profile in courage. I think those who criticize him can legitimately do so ONLY when they tell the truth about what and why he has taken a knee. If you distort what he is about, anything else you say is not to be taken seriously. Why should it?

And then there is Nike. I want to thank the company for the leadership role they have taken on. They knew there would be backlash. They knew some customers would leave the brand. But that didn’t matter. In a similar way that the Disney Corporation said no to the threats of some right wing Christian groups who tried to conduct a boycott against Disney World because they had an annual gay pride day, Nike has taken a stand for what is right rather than what is convenient. We seldom see such clarity of values from corporations. 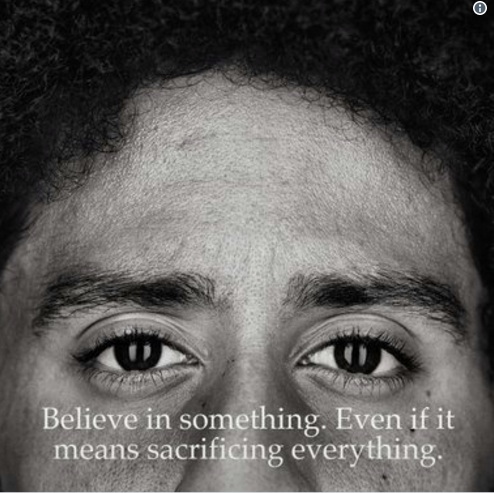