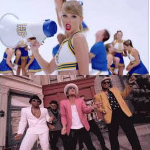 A study in the Journal of Consumer Psychology claims that repetition was the key to the success of most hit songs, such as Mark Ronson and Bruno Mars’ “Uptown Funk,” and Taylor Swift’s “Shake It Off.” The study asserts “This finding supports the theory of processing fluency, which suggests that the easier a message is to digest, the more positively people will react to it.”
So that’s it, then. If you want to write a hit song, just repeat something a lot.

What the study misses by a mile is how the structure of songs work. In “Shake it Off” and “Uptown Funk,” as in every other great song, there are built in tension resolution systems both in the actual music, but also in the lyrics. These tensions drive the piece forward, and strive for resolution in the end. As David Mamet said about drama, it creates order out of chaos. At first, we don’t know exactly what is being said or implied, but later we do. The tension is resolved, the question is answered.

In “Shake It Off,” the first lines are:

Okay, what Taylor is describing is the criticism the character in the song gets from other people. She is dumb and stays out “too late,” meaning she is having too good a time because she is stupid. Then more criticism:

So, she can’t have better relationships, and it is her fault that they leave. Notice it is that SHE “can’t make them stay.” But, the clever and skillful masterstroke here is in this one phase, “At least.” Here is a situation that may not be true, even if people claim it. In those two words, Taylor has completely positioned a contrast between what may be true and others impressions, which may not be true. These types of contrasts create tension-resolution systems that propel the song forward. This is not the function of repetition but of very carefully crafted structure.

Now, to contrast the original situation in which she has reported the criticism, she says (sings:)

But I keep cruising
Can’t stop, won’t stop moving
It’s like I got this music
In my mind
Saying, ‘It’s gonna be alright.’

No matter what they say, she has a certain level of self-knowledge, in which her restless spirit will keep moving, and no matter what is said, things are going to turn out alright, independent of the critics.
Then she states the condition of the world:

in other words, not let the phonies, the “fakers,” the “haters,” and the heartbreakers get to her. She will be free of them.

See how much the researchers didn’t know? It is as if they were watching the film Casablanca, and claimed that the reason people love the film was that there were a lot of black and white stripes in the film (which there are.) Kind of misses what’s really going on.

“Uptown Funk” is one of the best music videos I’ve seen in years. Bruno Mars is fantastic, as are all of the performers. And yes, there is a lot of repetition. But the repetition is in contrast to what is not repeated.

The song is in distinct sections, which is not a matter of repetition but contrasts of form. The first lines are:

This hit, that ice cold
Michelle Pfeiffer, that white gold, …

The next stanza contrasts cold with hot:

In fact, the major contrast in the song is between uptown and downtown folk. The song claims that uptown folk are much sexier and hotter. And the entire song is done with wonderful tongue in cheek. The video, itself, besides having magnificent choreography, moves in and out of street scenes, a beauty parlor, a shoe shine stand, and, in the grand finale, a club setting where everyone we’ve seen performs as one of the best show bands you’ve ever seen. Professional creators know how to create structures that build, and lead to final resolution of the tensions they have carefully set up. Movement, not repetition, is what people love about song form.

The fact that this study was taken seriously maybe one of the problems with the discipline of psychology, and it’s overall lack of understanding of structural dynamics. The principle is this: the underlying structure of anything will determine its behavior. Without understanding structure, it is easy to miss what is really going on, and hard to find the causal factors in anything.