Below is a blog I wrote about the previous terror attacks in Paris. It is sad that these words are more relevant than ever, and, again, our hearts go out to the people of France, of Europe, of the world. 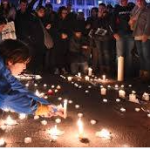 So, yesterday, there was another example of the tactics extremist use to break hearts, limit free thought, and, because it is terrorism, terrify us. The world becomes focused on the horrible event, as it should. More and more of these destructive acts are developing throughout the world. Has the world gone crazy?

There is a grand strategy behind this. It was developed by Osama bin Laden and is one of the al-Qaeda’s founding tenets. It is to polarize, to generate a reaction of the West to abhor the East, to hope that the West will overreact and reject innocent Muslims unfairly, who, will then in turn, react against the West and join the extremists.

Unfortunately, too often the strategy is working. There is more and more Islamophobia in the West. In Europe, the radical anti-Muslim right wing is gaining political strength.

The grand strategy is designed to lead to prejudice, hate, polarization, separation, suspicion, mistrust, skepticism, and cynicism. It is designed to generate unfair criticism. Those who fall into this orientation are supporting bin Laden’s grand strategy. The French Muslim Council said, “This extremely grave barbaric action is also an attack against democracy and the freedom of the press.” This group represents France’s Muslim community, which is Europe’s biggest and estimated to be between 3.5 and 5 million people.

Our hearts and prayers are in France today, as is all the world.